From ghostly medieval monks to the infamous Grey Lady, this historical town offers chills and thrills galore. Could Bury St Edmunds be the most haunted place in England?

She is said to appear in St Edmundsbury Cathedral's Great Churchyard annually on 24 February at 11pm.

The Grey Lady, has also been sighted at the Abbey Ruins, St Saviours Hospital ruins, the Priory Hotel, the Theatre Royal Bury St Edmunds, in shops on Abbeygate Street, in buildings on Angel Hill, and in the cellars of the 16th century Cupola House on The Traverse.

The mysterious Grey Lady has also been spotted at the site of the former St Saviours Hospital, near the town’s railway station.

St Saviours in Fordham Road was founded in 1184-85 by Abbot Sampson and was where elderly monks from the Abbey of St Edmund were treated. One of five such hospitals in Bury St Edmunds, it also offered a place to rest for weary travellers, including the pilgrims on their way to the Shrine of Edmund in the Abbey itself.

According to local tales, it was this nun, named Maude Carew, who killed Gloucester (and not the Duke of Suffolk, as portrayed in Shakespeare’s Henry VI, Part II). But this was recently debunked by Historian Dr Francis Young in his Blog The Ghost of Maude Carew. Other tales suggest she is a medieval nun who was punished with execution for a liaison with a monk at the Abbey.

Whoever our Grey Lady is, she is the town’s most frequently spotted spirit.

Apparitions of the Abbey’s Benedictine monks are frequently seen walking around the grounds of The Abbey and through surrounding buildings.

In 1961, two men claim to have seen a monk drift down Angel Lane before disappearing through a wall. A year later, a monk was reportedly seen ‘hovering’ in Churchgate Street.

Enid Crossley, a resident of the houses built into the Abbey's West Front, claims a monk appeared in her bedroom several times. Staff in shops on Abbeygate Street have also made claims about sightings of ghostly monks.

Theatre Royal Bury St Edmunds is over 200 years old and is the third oldest theatre in England so its seen its fair share of history and stories!

The Grey Lady which haunts several other locations has been frequently spotted here by actors and theatre staff!

Visitors to the town in October should keep their eyes peeled for a soldier and a nurse in Victorian dress.

The first reports were made in 1935 by two girls and their mother, who felt a chill as a man and a woman rushed past them on Eastgate Street. A gunshot and a scream were then heard.

Legend has it the woman was a 19th century nurse called Mary Treese, returning from the Crimean War with a wounded soldier she had tended and fallen in love with. Her father, however, disapproved of their relationship and shot the man dead. Their fateful end is said to be played out every year on 20th October on Eastgate Street.

As well as being one of Britain’s smallest pubs, The Nutshell, built in 1844, may also be one of its most haunted.

In 1975, the landlord returned downstairs from the room above the bar, telling patrons he had just seen a small boy sitting by himself and then disappear. And, in fact, it is thought a boy did die here in suspicious circumstances – some say by drowning in a bathtub.

Locals of the Nutshell also claim to have experienced poltergeist activity in the pub, with many blaming glasses shattered and batteries drained on the young ghost. Others, however, point the finger at a mummified cat, which hangs over the bar. This cat is said to be cursed, bringing misfortune to anyone who touches it.

Alan Murdie, Chair of the Ghost Club and author of Haunted Bury St Edmunds, says bad luck befell a landlady who tried to clean it as well as a group of servicemen from RAF Honington who kidnapped it as a prank. The landlady lost her job shortly after her cleaning attempt, and the servicemen say they were plagued by fires and accidents until the cat was returned.

During the infamous Witch Trials in Bury St Edmunds, accused witches were taken to a building where The Nutshell pub is today and had their nails or locks of hair. cut off The nails and hair were stored in brown jars in the basement as it was thought that if you were not whole when you died, you wouldn’t be able to come back as a whole witch in the next life!

Cupola House in the Traverse, was built in 1693 as a private home but destroyed by fire in 2012 before being rebuilt.

A ghostly Victorian lady dressed in white was spotted in 2000 by a member of staff on the stairs. She stood there for several minutes before disappearing into thin air.

A former landlady claimed that the cellars were an eerie place to visit at night and items would regularly be moved around with a strange eerie presence.

Once a workhouse, police station and gaol, Moyse’s Hall Museum has been the focus of ghost tales for centuries. The oldest of these stories dates back to 1328, when a woman is recorded as saying she saw ‘a most horrible devil’ in the building’s cellar.

In 1828, shrieks and apparitions were reported after the hanging of the infamous Red Barn murderer William Corder. These only stopped when Corder’s skull was duly buried.

William Corder, of Polstead, near Sudbury, was hanged in Bury St Edmunds in 1828 after being found guilty of murdering his lover Maria Martin in what became known as the Murder in the Red Barn. She was shot and repeatedly stabbed before being buried in a shallow grave in a barn.

Following his execution, a death mask of Corder was made and his skin was tanned and used to bind an account of the murder, which passed into Suffolk folklore. These are on display at the museum.

Brave souls can hear more spine-tingling tales about the town’s eerie goings-on by joining the Ghostly and Macabre Walk, held on various dates on dark autumn and winter evenings from Halloween to the end of March.

As you wind your way around the darkened streets there will be stories of screaming skulls, mysterious ‘monk’ like figures appearing in cellars, burnings, hangings and more, finishing up in the dark and deserted Great Churchyard where the tour guides will recall the stories from the Abbey and the famous Grey Lady.

Melford Hall in Long Melford and the nearby Bull Hotel both have ghostly inhabitants! Melford Hall has been the scene for many horrific events over the years. Between May and September in 1604, 119 men, women and children were burned during the plague epidemic. The hall is also said to be haunted by the ghost of Countess Rivers. Myth has it, she jumped from a window and drowned in the moat in 1651.

Just a short walk away you will find The Bull hotel, haunted since 1648 when a man named Richard Evered was murdered after a political dispute. Witnesses left him lying in the hallway as they ran to get help, but on their return, his body was gone.

The Haunted Room at Kentwell Hall

The Victorian Room at Kentwell Hall in Long Melford has been known to family members and their servants as the Haunted Room for many years.

It prompted one guest to pen The Kentwell Ballad in 1836.

With so many things to do and ghostly places to explore we know you’ll want to stay longer! Visit our Places to Stay Guide to find accommodation from historical homes to boutique hotels and from cosy bed and breakfasts to unique self-catering.

Dare You Take A Ghost Tour of Bury St… 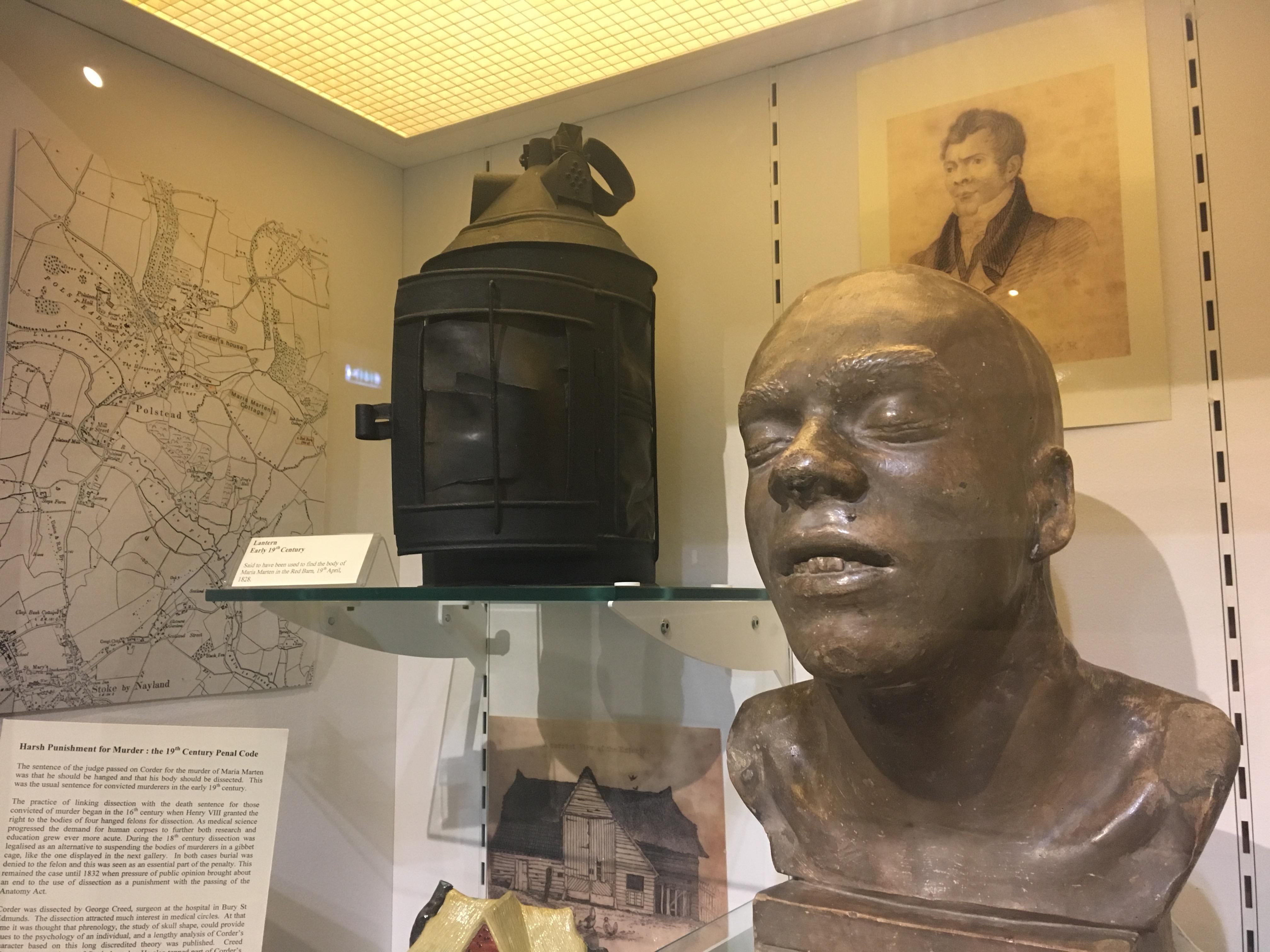 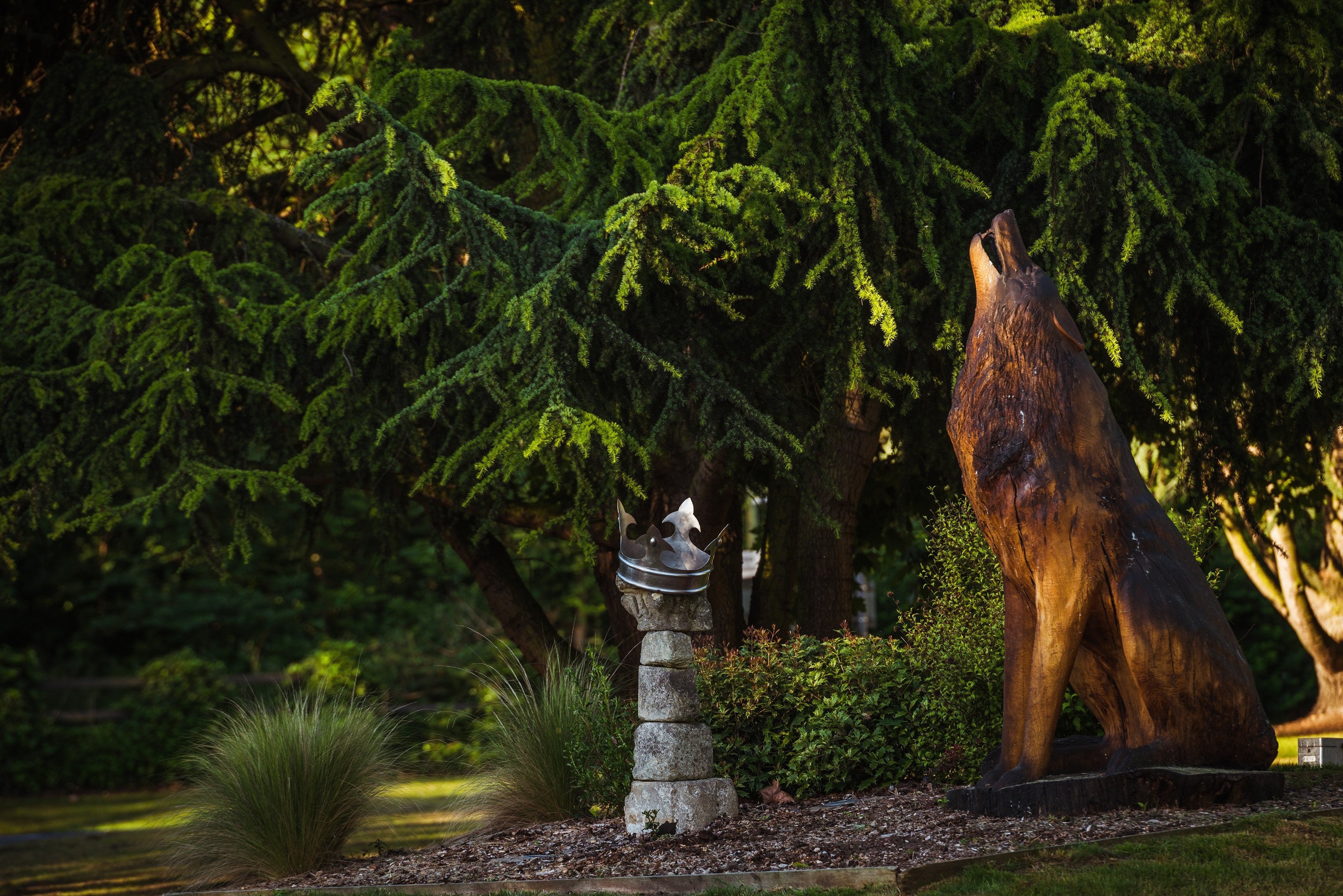 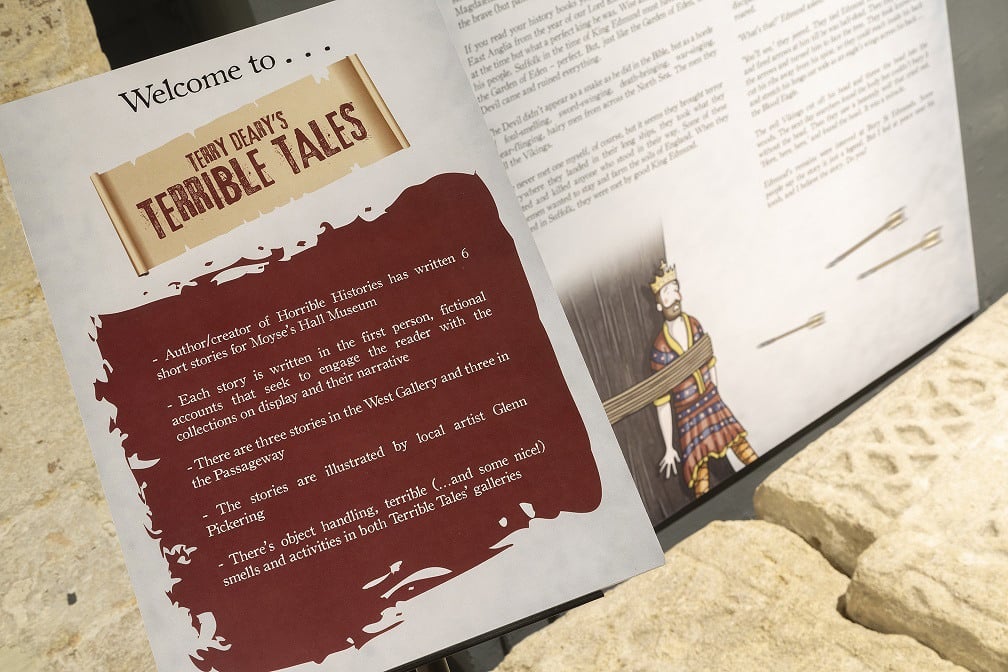 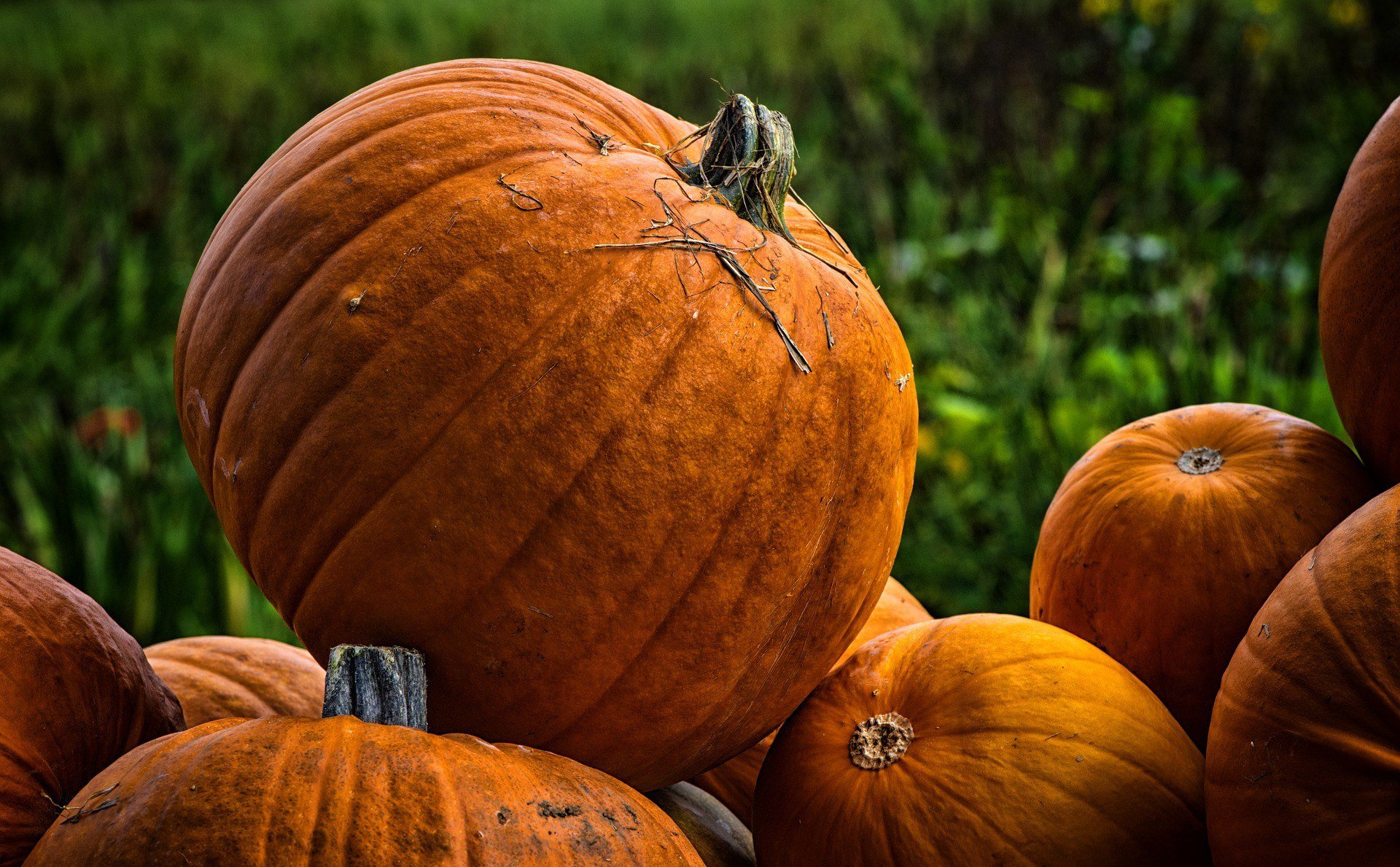 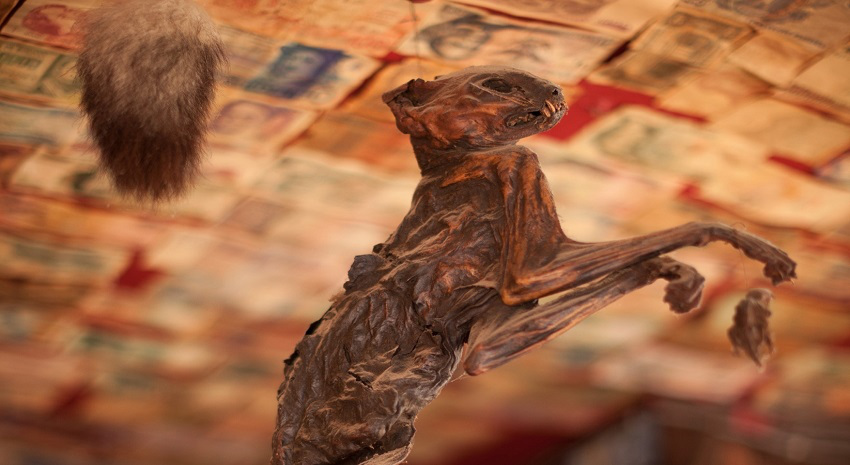