Where to Find Saint Edmund

The Statue of St Edmund

Lovingly sculptured by Dame Elisabeth Frink (he even has her nose!) stands young Edmund, a mere boy when he took the throne of East Anglia in 855. The statue can be found in the Great Churchyard beside St Edmundsbury Cathedral along with a wolf on guard.

The Abbey of Bury St Edmunds was once among the richest Benedictine monasteries in England, until the Dissolution of the monasteries in 1539. It was a centre of pilgrimage as the burial place of the Anglo-Saxon martyr-king Saint Edmund. The Abbey Ruins can be found in the Abbey Gardens.

The 7ft wood carving by Ben Loughrill on the Southgate roundabout depicts the animal that, according to legend, looked after the head of King Edmund after he was killed on 20 November 869.

The statue of St Edmund at his martyrdom

The iconic silver figure of St Edmunds by Emmanuel O’Brien stands tall on the Risbygate roundabout. The 9ft piece used stainless steel strands woven round the saint’s body pierced through with arrows.

The Legend of St Edmund Book

A wonderful oak book by Den Humphrey inscribed with the legend of St Edmund and the wolf can be found in the Abbey Gardens by the café.

Banner of St Edmund by acclaimed artist Sybil Andrews who was born in Bury St Edmunds and later moved to Canada. It is hand embroidered in silks on linen and first conceived, designed and begun in 1930. The tapestry can be found in the St Edmund Chapel of St Edmundsbury Cathedral.

In St Edmundsbury Cathedral, St Edmund and his protective wolf are featured carvings in the Bishop’s Throne. The Bishop sits there when he visits the Cathedral.

There is a small chapel in St Edmundsbury Cathedral named after the saint where you can also find the statue of St Edmund.

Nestled in the Abbey Gardens Appleby Rose Garden, behind the bench made from the wing of an American 'Flying Fortress Bomber, is the St Edmund Rose.

The Martyrdom of St. Edmund by Brian Whelan

This beautiful painting by acclaimed Irish painter Brian Whelan hangs in the Lady Chapel of the St Edmundsbury Cathedral in St Edmund’s Chapel.

The Martyrdom of St Edmund at St Mary's Church

A window at St Mary's Church depicts the marytrdom of St Edmund by the Danes. The glass is by Thomas Willement and is based on a medieval pilgrim's badge.

St Edmund and the Wolf at Bury St Edmunds Guildhall

A wolf can be seen guarding the head of St Edmund above the crest of St Edmund in the Banqueting Hall at Bury St Edmunds Guildhall, the oldest civic building in the country and now a heritage centre and venue. This stunning room with elegant chandeliers, was designed in 1806 as an elegant Assembly Room for the town.

At Moyse's Hall Museum you can just still make out a carving of a wolf guarding St Edmund's head just below one of the windows on the front of the historic building.

The landmark 12th century building rich and varied past has included serving as the town Bridewell, workhouse and police station, first opening as a museum in 1899.

If you look closely at the totem pole at Nowton Park in Bury St Edmunds you will find a yellow wolf holding the head of St Edmund!

One of the greatest symbols of St Edmund is on top of the cathedral itself.

The top of the Cathedral's Millennium tower represents St Edmund’s crown. Don't miss the cathedral's tower tours with stunning views from the top where on clear days you can see as far as Ely Cathedral!

Have we missed any? Where have you found St Edmund in Bury St Edmunds? 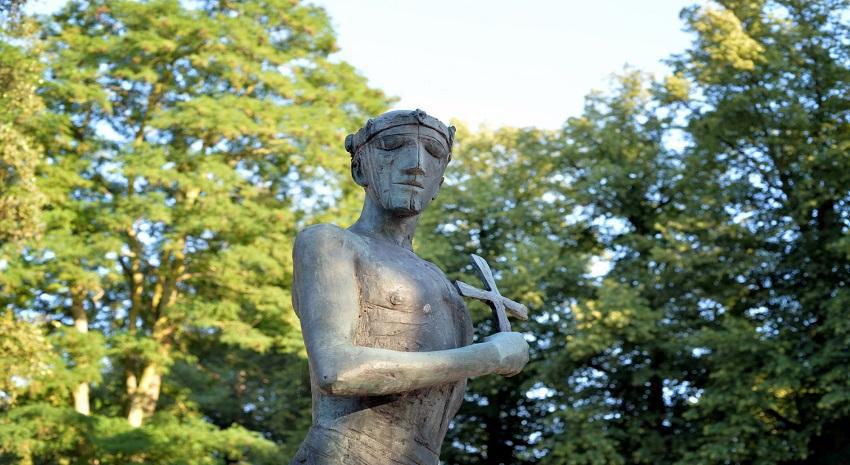